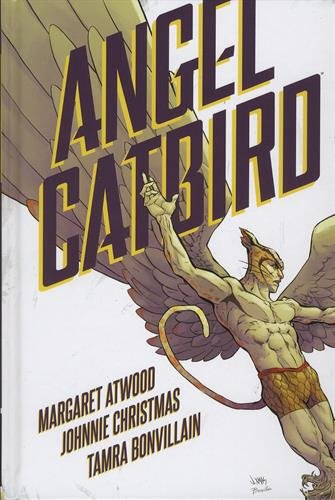 Internationally best-selling and respected novelist Margaret Atwood and acclaimed artist Johnnie Christmas collaborate for one of the most highly anticipated comic book and literary events of 2016! A young genetic engineer is accidentally mutated by his own experiment when his DNA is merged with that of a cat and an owl. What follows is a humorous, action-driven, pulp-inspired superhero adventure-with a lot of cat puns.

Review
"That sounds like an awful lot to pack in, but Atwood's breathless love for both the form and subject matter, combined with expressive art by fellow Canadian Johnnie Christmas (who beautifully captures Strig's evolving feline body language), make Angel Catbird a rather jolly adventure." --The Guardian
"September is turning out to be a terrific month for great contemporary writers making their comics debut." --GQ


Margaret Atwood was born in 1939 in Ottawa, and grew up in northern Ontario and Quebec, and in Toronto. She received her undergraduate degree from Victoria College at the University of Toronto and her master's degree from Radcliffe College. Margaret Atwood is the author of more than forty volumes of poetry, children's literature, fiction, and non-fiction, but is best known for her novels. Her newest novel, MaddAddam (2013), is the final volume in a three-book series that began with the Man-Booker prize-nominated Oryx and Crake (2003) and continued with The Year of the Flood (2009). The Tent (mini-fictions) and Moral Disorder (short fiction) both appeared in 2006. Her most recent volume of poetry, 'The Door,' was published in 2007. In Other Worlds: 'SF and the Human Imagination,' a collection of non-fiction essays appeared in 2011. Her non-fiction book, Payback: Debt and the Shadow Side of Wealth was adapted for the screen in 2012. Ms. Atwood's work has been published in more than forty languages, including Farsi, Japanese, Turkish, Finnish, Korean, Icelandic and Estonian. Margaret Atwood currently lives in Toronto with writer Graeme Gibson.
Johnnie Christmas is the creator/writer/artist of Firebug, published in Island magazine. He is also co-creator and artist of the Image Comics series Sheltered and Pisces from Image/Shadowline. Additionally his work has been published by Dark Horse Comics, Valiant Entertainment, BOOM! Studios and Black Mask Studios. He lives in Vancouver, BC.